I had a day out in London today. I was meeting some friends for drinks but decided to go in early and take a stroll up to Primrose Hill to visit the extraordinary Museum of Everything.

The name, you'll gather, is a gimmick. Of course it doesn't contain everything. But it does have one of the oddest collections I've seen in many a day. I'd like to show you exactly what I mean but this stark warning was posted on the walls in every room and an eagle-eyed curator watched my every move in case my hand twitched towards a camera case. 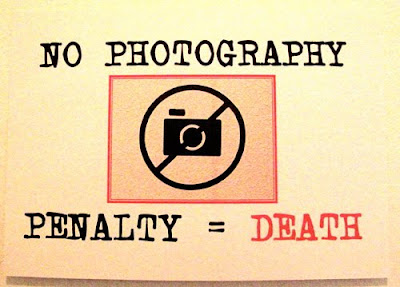 Instead, what I have is a meagre collection of images pulled off the interweb. They will, at least, give you a sniff if not the full quarter pounder and fries.

The Museum - curated by one of the founders of Brit-art, Sir Peter Blake - appears to be a repository for every obsolete puppet, toy carousel, poster, banner and exhibit that ever once graced a freakshow, funfair or circus. There are hundreds of individual pieces and everything has a kind of well-worn, grubby creepiness to it like props from a League of Gentlemen episode. There are grinning Mr Punchs and gurning ventriloquist dolls, weird angular shadow puppets and mannikins with scary painted eyes that follow you around the room. When you enter the place, you pass first through a little coffee bar selling 'lukewarm tea, punchy De'Longhi coffee and cakelets sourced from Lidlania and Iceland' and down a corridor covered in photos of giants and midgets and cases displaying General Tom Thumb's boots and a photo album of exceptionally hairy individuals. 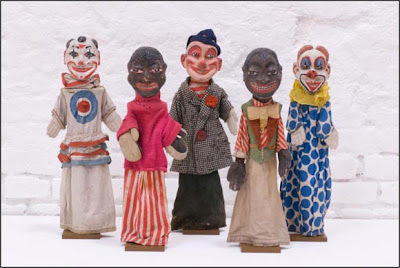 The Museum boasts a good collection of 'outsider art'; the kind of work that is made outside of the established gallery system and usually by untrained artists. Amongst the works on display was an amazing tapestry depicting a birds-eye view of Wonderland with Alice and all of her adventures. It's big and bold and colourful and yet every figure is so poorly executed that it makes you smile. It's like listening to Les Dawson play the piano. Or watching an Ed D Wood movie. Or an ITV sitcom. It's awful but it's charming and hilarious. Okay, so the ITV sitcom was a bad example. On the opposite wall is another set of tapestries made by Ted Willcox in the 1950s. His subject? Girlie mags. Brilliant! 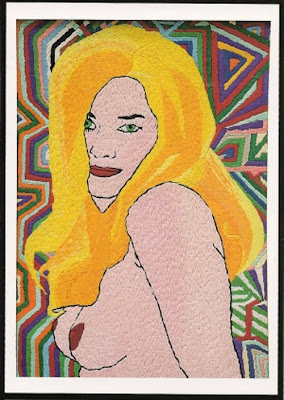 There's a room full of the miniature carousels and automata of Arthur Windley which makes you jump when it suddenly bursts into colourful, noisy animated life as you enter. But the star of the exhibition is undoubtedly the loopy taxidermy of Walter Potter. Some of his pieces are straightforward; dead family pets, birds on perches etc. But then you start discovering weirdness in the form of three legged geese, two headed lambs and worse. 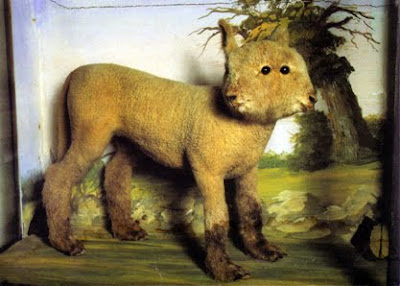 And then you come to the crowning glory - Potter's animal tableaux. Here you'll find families of toads playing in a municipal park. Or kittens at school. Or squirrels playing cards. It's total madness. The largest piece depicts the funeral of Cock Robin. Inside the case there must be at least 50 animals and birds all acting out the poem in glassy-eyed stillness. 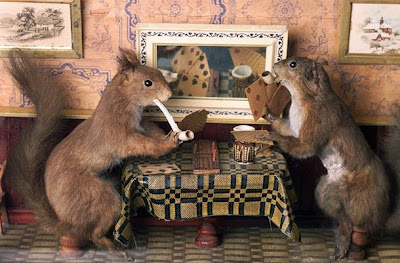 The Museum of Everything is there until February the 11th before it moves on. I suggest you give it a visit if you can. Entrance is free but they welcome a donation, large or small, to help with the running costs.
Leaving the museum I decided to walk into central London via Chalk Farm and Camden. As always there was plenty of street art to be found and some pieces were very good. This one was on the wall just up from the museum and made me laugh. I agree with the sentiment too: 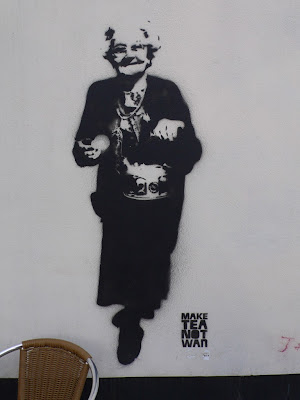 Walking further down Regents Park Road and over the railway bridge towards Chalk Farm, I came across this enormous leopard. 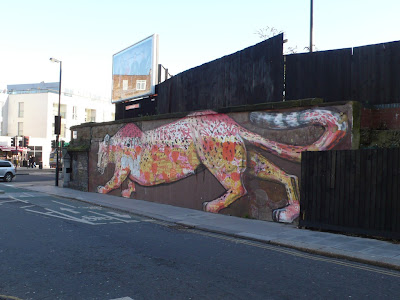 You get the scale of it in this next photo: 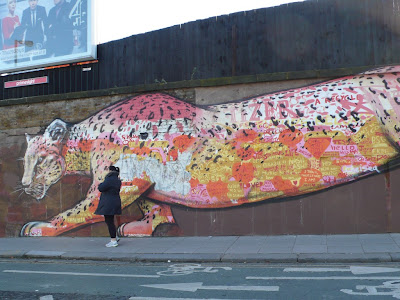 What I really liked about this piece was that it's interactive. Get up close and you can see that people have left individual messages all over the big cat's body. Quite contemporary messages too: 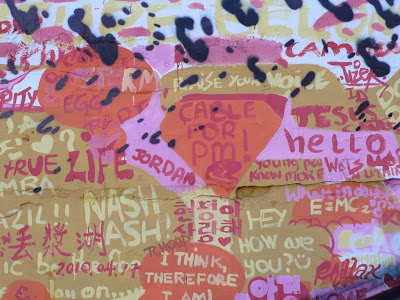 After a long but pleasant stroll I ended up in Holborn. As I came up towards New Oxford Street I was struck by the unlikely nature of this grafitti: 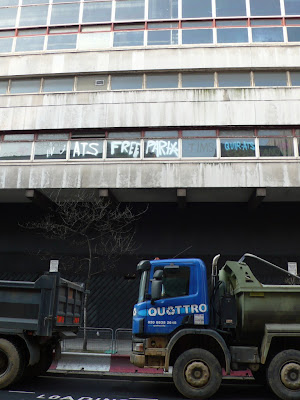 How on earth did they do this? There is the tiniest of ledges and thin window frames for them to cling to and the whole thing floats dangerously above a solid concrete pavement. Perhaps they got inside the building and wrote in reverse on the glass?
Passing by Drury Lane, I got a photo of the White Hart - London's oldest licensed premises. Reputedly first licensed in 1216, Old Bailey archives suggest that it was a popular watering hole for London's notorious highwaymen and regular customers included Jack Shephard and Richard (Dick) Turpin just prior to his hanging in 1739. Condemned men also stopped by for a final drink and the comfort of a good (bad) woman before facing the hangman's noose. 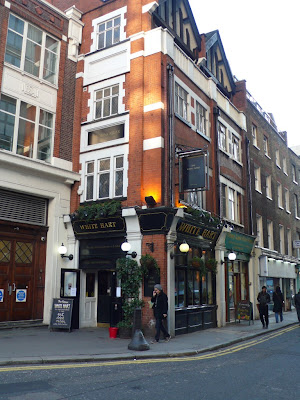 My final photos are from the new business development behind Centrepoint and called Central St Giles. Here you'll find this very pleasing bright red blob called Ob 8 by Steven Gontarski. I really like the way that it hangs in space among all of the grey concrete and glass. All the buildings around are reflected in its high gloss surface. Very pleasing. 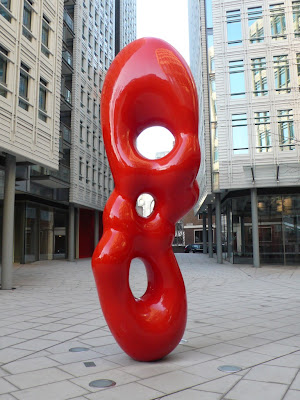 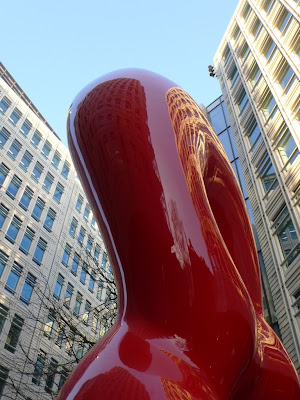 Then I met up with my good friend, photographer Mark Page, for a swift drink in the dingy and crassly-decorated rock pub known as the Intrepid Fox before going on to meet a great bunch of people I'd met on Twitter. 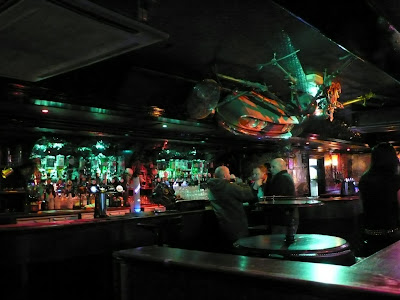 All in all, a very good day. I must have another one.
Posted by Stevyn Colgan at 11:41 pm