The art competition that isn't there

I've blogged many times times on the subject of art and, in particular, my utter belief that anyone can create art. The difficulty lies in persuading people that they can and that what they produce has worth.

People are always comparing what they do against the art of others. I guess it's a natural thing to benchmark. We want to know if we're on the right track. We want to know if we're up to scratch. However, art may be unique in that all forms of benchmark are invalid. How can you possibly say that a Lowry is better than a Rothko? Or that the Manic Street Preachers are better than David Bowie? Or that Buffy the Vampire Slayer is better than Doctor Who? You can't of course. All you can do is express a preference.

People look at a work of art that has impressed them and think 'I couldn't do that, therefore I'm not very good QED'. But the comparison is erroneous. I can't paint like Matisse. But that's because I'm not Matisse. My hand/eye coordination is wired differently. My life experiences are utterly different. I don't even live in the same century. I could try copying a Matisse but what's the point of that? Matisse has already done it and will always be the best at it. But, if you turn that around, it's a curious and revealing thing to consider that Matisse couldn't ever have done as good a Colgan as I can.

Have a look at these two images. One is a genuine piece by Dutch artist and founder of the Neo-Plasticism movement, Piet Mondrian (1872-1944). The other is an attempt to 'fake' a Mondrian. Which do you prefer? 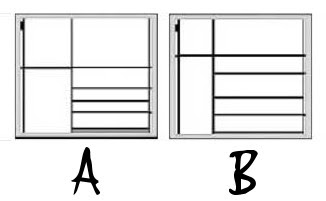 Chris McManus, a psychologist at University College London, showed these pictures to different groups of people and asked them to identify the Mondrian. More than half, 55% to 60%, could distinguish the original. When asked why, they stated that they preferred it. 'The arts dominate everything we do in life,' says McManus. 'There are aesthetic judgments lurking everywhere. And actually, psychologists spend precious little time thinking about it. They know much more about rats in mazes, than they do about why people like things which look nice.' McManus asked himself whether a Mondrian (black lines, white backgrounds, blocks of colour) was in any way special because he kept hearing people say 'anybody could have done it'. What he discovered is that, despite its apparent simplicity, a Mondrian painting does have something that makes it a Mondrian. Not everyone can do a Mondrian.

By the way, the real Mondrian was Picture A.

What you, I, or anyone else create as art is as valid as any other art because of its uniqueness. There isn't some 'art race' that we're all entered into in life and we either win or lose. Yes, some artists do catch the zeitgeist and become immensely popular. That doesn't make them better. It just makes them more popular. Many of the most famous artists in history were very unpopular in their lifetimes precisely because they were breaking new ground. Their art was unfathomable, misunderstood, even seen as dangerous. But it wasn't bad art. It was simply unique and a variant from the prevailing fashions.

Creating art isn’t a physical skill in the same way that dunking a basketball is. Whatever flourishes and style you apply to it, there’s only one way to do it; through the top and out the bottom. In sharp contrast, there is no right or wrong way to create a piece of art. Therefore, you can’t use any kind of points system to asses a piece of art. There’s no comparable benchmark – ‘That artwork is worth two points, that one three’. It’s a nonsense (and one reason why I revile the current public education system).

In a recent chat on Ken Plume's always excellent blog A Site called Fred, QI creator John Lloyd talked about his lack of competitiveness and pointed out that there are two kinds of sport: Type (A), which is the truly competitive sport that pits person against person, team against team, and the spoils go to the victor(s); and Type (B), which is where the competition, such as it is, is only with yourself. The latter tend to be sports that are enjoyed in isolation. By way of example he said that playing a solitary round of golf is hugely enjoyable and his aim is to play better than he did before. Similarly, when he skis, he tends to try to get better for his own satisfaction, not to win a downhill race. Listening to this, I was suddenly struck with the realisation that art is definitively Type (B). The competition is only with yourself. The mistake people make is in seeing art as Type (A). That was a real eye-opener moment for me.

Returning to the basketball analogy, Type (A) would be playing for the Harlem Globetrotters. Type (B) would be dunking some hoops in your back garden. The former involves you being part of a team trying to accrue as many points as possible to win. The latter involves you, on your own, trying to get better at dunking the ball and improving your own personal score. As an artist, you tend to work in isolation. There are no art races or tournaments. There are no teams or league tables. You’re a Type (B) backyard dunker. You create for the pleasure of doing so and your own satisfaction should grow as you get ‘better’. The only valid measure of ‘better’ in art is your own satisfaction with what you’ve done. Where people lose satisfaction is when they measure themselves against ‘the competition’; when they see art as a Type (A) competitive 'sport'. But that's silly. What you produce is wholly unique. You can’t measure it against anyone else’s art. That’s basketball players pitched against cricketers, Lowry racing against Titian.

The only thing stopping you is you.

Note: The Mondrian images and McManus quotes are taken from a 2002 Guardian feature originally published here.
Posted by Stevyn Colgan at 10:43 am