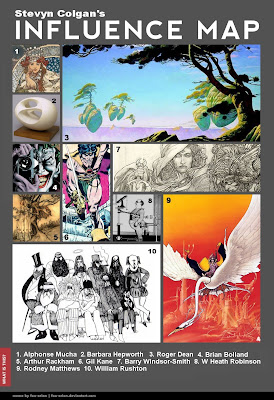 I've seen a few of these Influence Maps around recently and decided to have a go at creating one myself. It's the brainchild of Boston-based illustrator Matt M. Laskowski (Fox-Orian). It's specifically a graphic representation of the artists that have had the greatest influence on the way I work. The larger the box, the more that person has influenced me.

I really had to think long and hard about this; there are hundreds of artists whose work I love but they haven't really impacted on my style. I love Salvador Dali and Jean Arp and Beryl Cook but I don't paint or sculpt like them. After much deliberation, I eventually settled on the 10 above. They have all, in some way, led me to where I am today. Click on the graphic for a larger version.
Roger Dean and Rodney Matthews dominated the poster market in the late 70s. Well, them and that tennis player scratching her arse. The Big O poster company and the Athena poster shops turned LP sleeves and book jackets into affordable art and launched artists like Dean and Matthews, Patrick Woodroffe, Chris Foss, Philip Castle, Ian Miller, Chris Achilleos and many more into stardom. You could buy the posters in record shops and Woolworths too. Everyone had at least one on their bedroom wall. And if it wasn't a modern fantasy poster it was often a retro art poster by Mucha or Lautrec. They were really popular.
The roaring trade in poster art led to Roger Dean starting up the Dragon's Dream (later Paper Tiger) art book imprint. I bought pretty much every book they produced and feverishly tried to copy the various artists. One hugely influential book was The Studio, which featured the New York loft space occupied by artists Mike Kaluta, Bernie Wrightson, Jeff Jones and Barry Windsor-Smith. The loft was subdivided into four areas with each artist having their own work area with a shared 'hub' for socialising and bouncing ideas off each other. I dreamed of one day working in that very same kind of creative hothouse atmosphere. To be honest, I still do. Of the four, Smith was the artist I copied the most. At the time, he was drawing for Marvel comics - Conan mostly - along with another artist whose work I idolised - Gil Kane. We got very few US comics in Cornish shops back then but Marvel UK ran large format black and white reprints. My favourite was Planet of the Apes comic; not so much for the apes but for the secondary stories like Warlock and Gulliver Jones, both drawn by Kane. We also got the black and white reprints of Savage Sword of Conan which boasted artwork by Windsor-Smith, Kane and other artists that quickly influenced my style like Alfredo Alcala and Alex Nino. Then 2000AD came along and, like many others, I was soon aping the artwork of people like Mick McMahon, Kevin O'Neill, Steve Dillon and especially Brian Bolland. What's wonderful, some 30 years later, is that I now count some of those people as friends.
One man I never met but who had a huge influence on me was Willie Rushton. I've blogged on the subject before (see here) so I won't repeat myself. He was a wonderful cartoonist and I took great pleasure from his savage caricatures and scratchy inkwork. My school had bound editions of Punch magazine and I spent hours going through them finding his work. Along with Rushton, there were Ralph Steadman, Ronald Searle, Ed McLachlan, Martin Honeysett and Quentin Blake, and they led me to discover the golden age of British illustration. I soon became bewitched by Arthur Rackham, W Heath Robinson, Kay Neilson (okay, so she was Danish), Monro S Orr, Aubrey Beardsley, Ernest Shepherd, Sir John Tenniel and the rest. I still hang out at Chris Beetles' gallery in London whenever I can just to drink that stuff in.
The final, possibly puzzling, influence on my grid is Dame Barbara Hepworth. She's there for a couple of reasons. Firstly, she represents a style of sculpture that emulates the natural forms found in nature. I love that kind of thing. Like the work of her contemporary Henry Moore, her pieces look like they've been weathered into shape by the wind and rain over millennia. They mirror the organic shapes of the odd buildings and landscapes in Roger Dean's paintings (we've gone full circle!). But they also remind me of my childhood in Cornwall. The cliffs around where I grew up were wondeerful to sketch as they'd all been carved in the wildest shapes.
My father was a keen artist and writer and he introduced me at an early age to both the Newlyn and St Ives schools of painting. I have a particular fondness for Stanhope Forbes and Walter Langley to this day and will always pop into the Newlyn Gallery and Penlee House for a look when I'm visiting the folks. I visit Hepworth's house whenever I can as it holds fond memories for me. I met her once, very briefly, about a year before her tragic death. My dad, who was a policeman in his day job, had found a sculpt that he believed was hers and had gone around to get it identified (see here). I was with him in the car (having been collected from school) when he popped around to her house. I was spellbound as I sat drinking squash in her garden, marveling at the half-finished pieces all around. She was lovely and I get a strange tingle whenever I re-visit the house, now a museum and part of the Tate gallery.
So there you go. My artistic influences. You can see a little bit of all of them in the work I produce, whether it's for a client or for pleasure. It may be the way I draw an eye or use a coloured ink. It may be my choice of brush or the shape of the rocks in the background. te influences are there to see.
If you fancy creating your own Influence Map, there's a Photoshop template on Matt's Deviant Art site here. If you don't have Photoshop, grab a copy of mine and replace the images with your own.
Posted by Stevyn Colgan at 5:32 pm

Mmmm! Think mine would be all Lowry. Matchstick people! That's about my limit. Now sewing, that's a different matter!