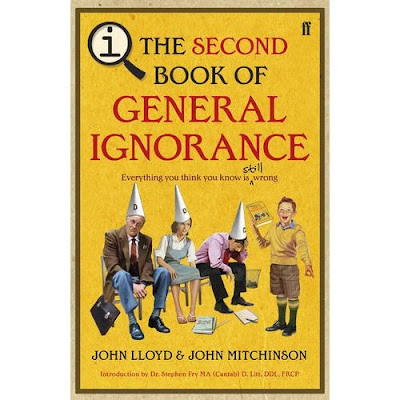 In just a few weeks, you'll be able to get your mitts on The Second Book of General Ignorance from my good chums at QI. And once again, you'll discover that lots of things you thought you knew ... you don't. Things like: 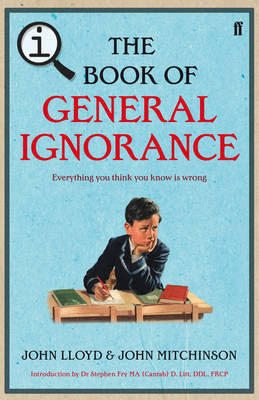 The Elves are also releasing a tasty new hardback re-issue of the original Book of General Ignorance with a complimentary new cover by Syd Brak. First published in 2006, the BOGI has been translated into 26 languages and has sold over 1.2 million copies. I'm told it's the 4th bestselling book ever on Amazon; no mean feat when you consider that there are seven Harry Potter books and seemingly no end to Dan Brown's outpourings.

Anyway, that's the plug over. Oh, and there are two annuals this year (see right)!

In honour of the new books, I thought I'd share a couple of things I've found out this past week or so; things I didn't know I didn't know. Let me ask you two questions. I didn't know the answer to either. I do now. Here we go:

1) What's the origin of the word Dad or Daddy?

The 'dad' question came up because I just couldn't figure out the etymology. Father, Pater, Papa etc. is easy as they all come directly to us from the Latin. But Dad?

I knew that the Cornish for Dad is Tat and it's Tad in Welsh and Daid in Irish Gaelic but, as very few words from the Celtic languages survive in modern English, I didn't expect that to have any relevance. So I was pleasantly surprised to find out that Dad actually may be Celtic after all.

According to Walter W. Skeat's An Etymology Dictionary of the English Language (1893), it's an ancient Celtic term of endearment as old as the hills, prehistoric even, and may have evolved from a child's instinctive first words. It was used 'by parents addressing their children, by teachers addressing their pupils, and by children addressing their parents.' So, once upon a time, I might have called my kids 'Dad' as a way of calling them 'Dear one'. Extraordinary.

As for the fridge ... hasn't it ever puzzled you how it does what it does? Heaters are easy to understand as friction or flame creates heat. So whether you're rubbing your hands together, building a log fire or agitating molecules in a microwave, it's easy to see where heat comes from. But how do you generate cold? Well, here's the amazing truth ... a fridge works by sucking the heat from the very air itself.

Gas is drawn at low pressure through a line. It is then compressed to a higher pressure and its temperature rises (just like a bicycle pump which gets warmer when you are pumping up a tyre). It is then transferred to a condenser where the heat is removed and the gas begins to condense into a liquid. The heat is released via cooling fins on the back of the fridge unit. The liquid then goes through an expansion device where its pressure is suddenly lowered. As it expands some of the liquid turns very quickly into a vapour. This change of state has a cooling effect. Now the cold vapour and liquid are able to cool the air in the cabinet of the refrigerator through an evaporator. The liquid absorbs the warmth from the air inside the refrigerator and turns back into a low temperature gas, at low pressure. It now starts its journey again through the compressor. Yes, that's right, your fridge is a heat eater.

Why oh why can't they leave things alone! Diamonds usurped as the hardest substance! But saying 'A wurtzite boron nitride is forever' or 'I'm buying my fiancee a lonsdaleite solitaire' doesn't have the right ring to it. If you'll pardon the pun.