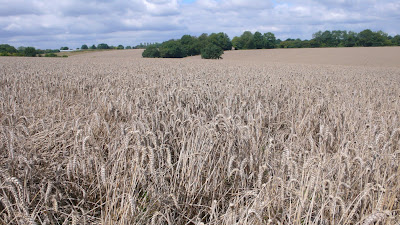 It being a Bank Holiday Monday today and seeing as how it was untraditionally sunny, I decided to take the grandchildren and the younger dog (Willow) along to the Hazlemere Summer Fête. The journey involved yomping around several fields of wheat and what a joy that was in the late Summer sunshine. As we walked I showed the kids how to winnow the wheat from the chaff and we picked and ate blackberries, elderberries and damsons from wild bushes as we passed them. I got them to try a sloe as well just to see the expression on their faces. Hilarious. 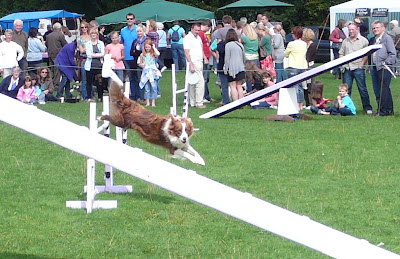 It was, in fact, the 150th such fête and there was much celebrating of the fact with the local historical society displaying photos of previous events going right back to the advent of photpgraphy. In looking at them I was struck by how poignantly they showed the evolution of the area from village to suburb. Photos from the first half of the 20th centuy showed local people out in their Sunday best with hats and bonnets in proliferation. The stalls themselves were those you associate with village fêtes; home-made cake stalls and tombolas, vegetable shows and Aunt Sallys while the local brass band played in the background to keep the atmosphere jolly. Back then, Hazlemere was an actual village, separated from nearby villages like Penn, Four Ashes and Widmer End by fields and dirt track roads. The arrival of the motor car and the ever expanding housing stock meant that the villages soon start to merge together into a circualr suburb around the town of High Wycombe. The names still exist but these days it's hard to spot where Hazlemere ends and Holmer Green begins, and vice versa. 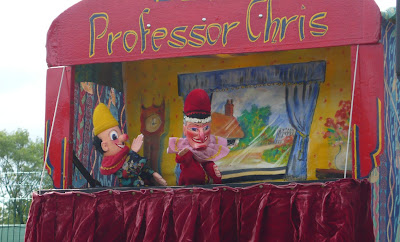 It's a curious fact that as the villages merged, communities drifted apart. In a small village, everyone knows everyone else. But once a suburb reaches a certain size that kind of cosiness disappears. There is a theory that states that we can usually maintain no more than about 150 contacts at any one time. It's called Dunbar's Number (read more about it here). There are more than 150 people living in my street alone and, frankly, the only ones I know are my immediate neighbours opposite and to either side of my house. The villagers of Hazlemere captured in those early photographs would most likely have all known each other. But as I walked around the 150th such fête I was struck by the fact that I didn't know or recognise anyone. And I've lived in the 'village' for four years. The stalls too had changed. Instead of the community sharing and displaying their home grown produce, the stalls were mostly generic and manned by professionals who travel from show to show. There was nothing unique about the fête. Nothing cried out 'This is Hazlemere'.

That said, it was a pleasant afternoon of dog shows, face painting, ice creams, owl displays, fire engines, lamb roasts, beer tents, Punch and Judy shows and lots and lots of fund raising for local good causes. And Willow came second in the waggiest tail competition. She'd have come first if we'd had more people cheering for her. The winner, a small brown mongrel called Rosie, had brought an entourage of kids along, curse her furry arse. 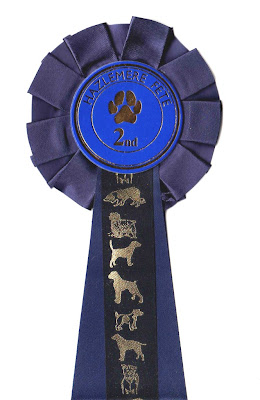 Willow won a lovely blue rosette and I'd like to say that she wore it with pride but she wasn't allowed to. the same Health and Safety nonsense that meant that there was no cake stall ('We can't be sure of the ingredients') and no donkey rides ('We didn't have enough hard hats') meant that Willow was not allowed to wear her rosette until off the site 'in case she got stabbed by the pin'.
Ah how times have changed.
Posted by Stevyn Colgan at 4:46 pm

Sounds like a wonderfully safe day with the grandkids. Laughed out loud when you cursed little Rosie's furry arse. That's what I like best about you...you're a genial fellow with no bitterness in you.

I'm beginning to wonder whether this health and safety tosh becomes more of an issue the closer one gets to London. I've been to a number of fetes down here in East Sussex (in my capacity as trainee morris dancer!) and can confirm that, in Sussex at least, home made cakes and other confections are still to be had. There seems to be a healthy and general disregard for 'authority' here, summed up by the well-known Sussex phrase, 'We wunt be druv!'