I, like almost everyone I know, have just watched the Obama inauguration. What an extraordinary event. Can you imagine people around the world tuning in to watch Gordon Brown get sworn in as Prime Minister? Hell no. Brown suits his name; muddy, dull, slightly unpleasant. By comparison Barack Obama has that same quality we once saw in people like JFK and Churchill; that ability to rouse a nation from its torpor and inspire great works. 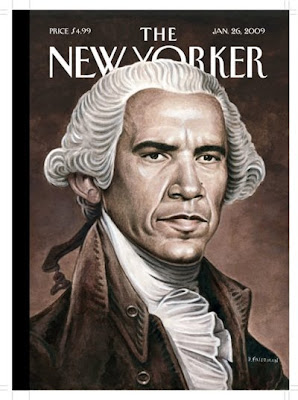 Kennedy said that he'd get a man on the Moon. Obama has a harder task - he has an economy to restore and a planet to save (well, a major contribution towards that goal) - but he embraced the challenge. His speech was peppered with great soundbites about global warming and reusable energy and of 'harnessing the sun and wind'. He subtly attacked the oil barons who've grown fat and gouty on the profits of their wells and who've so far kyboshed all attempts to get the USA to acknowledge its pivotal role in reducing carbon emissions.

But there was more, so much more on offer here. He talked about 'elevating science to where it belongs'. Well, Hallelujah to that! Hopefully this will see a drift back towards reality and away from the blinkered, backward thinking of creationism and other such mumbo-jumbo. Great scientists and great science is born from understanding, enlightenment and freedom of thinking, not from superstition and the tight confines of scripture. When he talked about the American people, he talked of Christians and Muslims, Jews and Hindus and - Hoorah! - non-believers. At last! A US president who acknowledges that there are atheists and humanists out there who want to do their part to make America great while also being seen as equals with those who have faith. He talked about the war on terror and that Americans should not be living in fear. Good. We've lived with mainland terrorism for decades here in the UK and we're damned if we'll give in to these maniacs. The threat of vile acts should not change the way we live - if it does, the terrorists have scored a point. So hopefully we will see a change in the way we're treated at immigration when we visit the USA from now on. I bloody hope so anyway. It was a speech that spoke of the next generation while acknowledging a debt to those who went before. It was a speech that spoke not only to America but to the world; extending the hand of friendship to those who are willing to 'unclench their fist'. I loved every minute of it.

Obama, as I said before, isn't Superman but today he provided something that so many people have wanted for a long time; hope, inspiration, a vision of how things could be and a very real sense that if anyone stands a chance of achieving it, he's that person. I was gobsmacked - and that doesn't happen often.

If only we had someone with even 50% of that charisma on this side of the pond.

My daughter is in Washington DC right now. She watched, from the middle of the frozen reflecting pool, George Bush leave the White House for the last time. She was describing the moment to me while alternately screaming, "Go, George, Go! *sigh*

She met Colin Powell in the crowd, walking about witnessing history with hundreds of thousand other Americans. He spoke with them.

She said the biggest thrill, strangely, was shouting Amen! Amen! AMEN! with all the other thundering voices.

It's a proud day.

Thanks for this post. Brilliant. Nice to get a take on the day from over there. Here, everything is too loud and rah rah for me.

Debby - It must have been great to be there.

Rob - It's quite bizarre. I've never seen so many Brits excited about a US president before. I guess it's the frustration we've all felt about Bush's regime having the opposite view to ours on things like global warming, gay rights, terrorism, abortion, creationism etc. It now feels as if there's someone intelligent, honest and liberal in the White House.

Hi Stevyn, it certainly is wonderful to feel that hope again. Finally, it seems there's someone calm, intelligent and competent who can lead the way out of this mess. Sure, not everyone voted for him (I did!), but so far Obama is doing a good job of reaching across party lines and uniting us as a nation. That's pretty remarkable (all in all, people want him to succeed). And yes, right now he's a media darling--of course his true tests are yet to come--but let's hope that works in his favor and allows him to act swiftly so we can all move forward. :)

Debby-- Wow. I can hardly imagine what the energy in DC was like yesterday. How exciting for your daughter!

I admire all the hope and inspiration that Obama instills, I just wish I didn't have to pay for it all.