Talk of bloggernyms and 'secret identities' (Is it a walrus? Is it a hippo? No! It's Colganman!) ties in nicely with the subject of egosearching.

Come on ... you've all done it. At some point in your life you've popped your name into a search engine to see what the internet spews back at you. That's an egosearch. I have an excuse these days as I'm looking to see which companies are stocking my book and I'm looking for reviews and mentions. But I have done it before many times and it always fascinates me to read about other Colgans. It's not a common name but neither is it particularly rare. I've found a US senator called Charles Colgan, a popular author called Jenny Colgan and a singer songwriter called Eoin Colgan. There's an airline called Colgan Air (mentioned in a previous post) and now, I discover, there is a Colgan Car Bra. 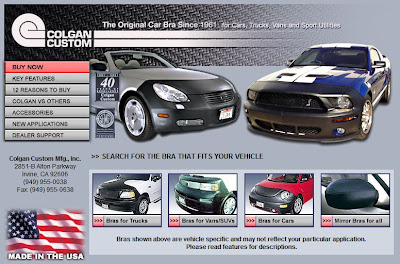 I kid you not. There is a such a thing as a bra for your car. At least, that's what the company have chosen to call this strappy, slinky, black cover thingy that goes over the front of the bonnet of your car/ lorry/ van and which, presumably, prevents stone chips to the paintwork and bug smears. It's a new product for me. I've certainly never seen one here in the UK. But why call it a bra? Surely it's more of a shirt or a vest? But if it is a bra, it's a saucy peephole bra. Cor, look at the headlights on that!

I can't get the idea of car boobies out of my head now.

Posted by Stevyn Colgan at 6:41 am

Actually, this is something I already knew about. You're right about not seeing them here, but I used to see them all the time in Houston. Generally, though, they were usually on flashy cars with (male) drivers to match.

I don't know who came up with the "bra" name for the product, but I've often wondered. Presumably somebody who thought it would appeal to the "boy racers" out there who are dying to spend money to jazz up their machines?

John and I often talk about things that seem "VERY American". The idea of putting a bra on your car fits that category perfectly!

So now you know what the Yanks from your family line are up to.

PS I was just thinking. Somebody could re-do that old Python sketch, except this time around they could have the goofy villagers fumbling around taking the bras off cars!

I never realized before that car bras are a uniquely American innovation. Car boobies though? That's just you. Can we expect another cartoon? A whole new take on which car is the best built car....

I've Googled my name, and find that I appear to be a musician, a criminologist, an artist, an actor, a woman, and an expert on Heinrich Himmler. Sadly, none of these are me. However, if you Google "Middenshire Chronicles"...

The car bra reminds me of nothing so much as a dog muzzle.
I've done the google-your-name exercise (which is actually recommended by some security experts). My actual name (which isn't all that common) brings up a widely-traveled knitter purling her way to knitting conventions, an accomplished handball player, a breeder of race-horses, a "defrocked" medical doctor, and even me, mostly on genealogical forums (don't get me started), as well as for a seminar on ESL I gave at a Canadian university nearly ten years ago.

Janet - Yup, only in America. We would have called it a Bonnet Protector or something dire ike that. And I still love that Python sketch! After you mentioned it last time, I watched it again. Here it is: http://www.youtube.com/watch?v=TSqkdcT25ss

Debby - Yes, there may be a cartoon. It'll be a new slant on an old idea ... how can a penis substitute have boobies?

Chris - You are a man of many talents, none of them yours.

Persephone - A Car Muzzle. Much better name. But what is ESL? English as a Second Language?

I've used Babelfish to translate the thing into German. "Car bonnet cover" becomes Automützeabdeckung, and "car muzzle", Automündung. But my favourite has to be "bonnet muff" - Mützemuffe.

I should get out more, I know.

Chris - Please rush my Mützemuffe without delay! Will that make me a muff-driver? I am so, so sorry.

As an aside, I desperately tried to make a pun of car bra and macabre. I failed. Dismally.

Should you wish to drive your muff in Spanish, you would become a conductor del manguito. Or, in Dutch, a mof bestuurder. Which sounds even better!

Huh. I didn't realize that was an American thing either. Used to see them more often in this area years and years ago, but not so much anymore.

I like the names all of you have come up with!

Katie - I wonder if young male drivers fumble getting them off? And do they have training car bras for learner drivers?

Michele - In 30 years of policing I've never seen one in the UK. And yes, these bloggers are an inventive lot aren't they? That's why I like them. x