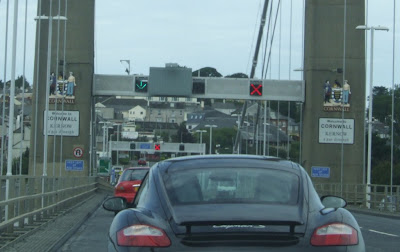 Well hello all! I'm back from the wilds of Cornwall ... although 'back' is probably my least favourite word at the moment as I've really put mine out. It happens periodically, the result of a serious injury I sustained 10 years ago. I was simply clearing the car of rubbish after carrying our bags etc. into the house this evening and [click!]
Posted by Stevyn Colgan at 6:23 pm

I love these charming country events. And I agree, that rabbit looks like something straight from a horror film!

Oh you're making me so homesick for Cornwall, I have wandered the quay at Charlestown and cliffs at Carlyon Bay. Green with envy.

Willow - I absolutely adore these events and go to as many as I can.

Yes, it is gorgeous on that coast but don't go too green. Someone might enter you for a vegetable competition.

Yo Stevyn! I'm afraid the vegetable "mole" looks rather like the mummified head of a chough, though I rather hope it isn't. And I particularly like the vegetable chimera - is it perchance the very rare Carpotsweonioccoli? With whiskers?

Chris - It may well have bean (chortle). Don't you think that there'd be less bullying and fewer stabbings in schools if all children were forced to construct vegetable animals? Forget 'Hug a hoodie', why not 'Swap your shiv for a carpotsweonioccoli'?

No fair is complete without someone in a costume walking about to scare the bejeebers out of the kidlets.

You all could try America's approach to reducing school stabbings: just give everyone the constitutional right to carry guns. It's worked beautifully here. You don't hear so much about school stabbings.

Debby - There are those who say that only the British can do irony ... you've proved them so, so wrong!