I am so, so sorry for this dreadful visual pun. But after having typed two quite vitriolic posts this evening, I felt that it was only right to post a playful, happy third. 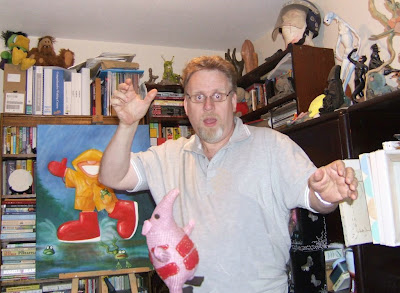 The Clangers - Oliver Postgate and Smallfilms' strangest show - would take an entire book to analyse. The Clangers themselves - who, oddly enough, didn't clang but communicated using a curious language that sounded like someone arsing around with a slide whistle - were oddly pink woollen creatures who lived under dustbin lids on a tiny Moon somewhere in the depths of space. They subsisted on blue string pudding and soup (as long as the Soup Dragon was happy to give it up for them) and had a spacecraft powered by musical notes plucked from a music tree. Other inhabitants of the planet included a trio of orange ratchet-legged froglets (who travelled through space in a top hat), an iron chicken who ate nuts and bolts, glow buzzers, skymoos, hoots, and a sentient rain cloud. Watching The Clangers was, I imagine, not dissimilar to dropping acid. 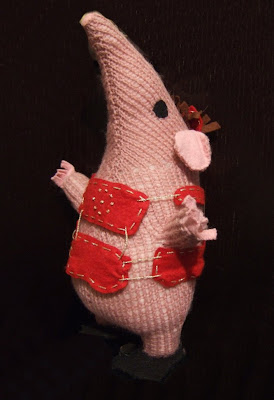 Here's my personal Clanger. A few years ago, when I used to frequently tread the boards for various amateur dramatic and semi-professional theatre companies, I met a lovely wardrobe mistress called Louise Green who churned these wonderful handmade plushies out as a small business. And such was people's love of the little pink aliens that she did a roaring trade.

Just a thought ... if aliens actually did look like this, and they developed advanced weapons technologies, and they could travel at faster-than-light speeds, and they became bent on invading and conquering the Earth ... would we be able to take them at all seriously?

Let's face it, Oliver Postgate is the Mozart of children's TV. Imagine the uproar if they did 'The Clangers' today, would the Mail demand that we 'ban this sick filth' ?

If the Clangers invaded would they shrink after a heavy rainfall or what if they came unravelled. That would make an ace high tension action scene as the injured hero watches the roaring (?) clanger charging towards him but all the while his wool supply is unravelling until, inches from our heroes face it explodes into a messy cloud of stuffing...Look what you've done now! I'll have to go and lie down now...nurse!
Mary Mungo and Midge...the mouse used to sit on the dog's nose to push the lift button. they lived in a flat you know...