The Rime of the Anatidae Mariner

Alex Boese has a great new book coming out shortly (August 1st). It's called Elephants on Acid (and other bizarre experiments) and tells the story of some of the world's strangest scientific methods. You may know Alex as the author of two great books - The Museum of Hoaxes and Hippo eats Dwarf. He's an acknowledged expert on the subject of hoaxing and the idea for this new book sprang from his research. Every so often he'd come across a mad story ('Surely not?') but then be surprised to find that it was utterly true ('No way!'). I've seen a couple of chapters and I highly recommend it. Pre-order it now by clicking here. 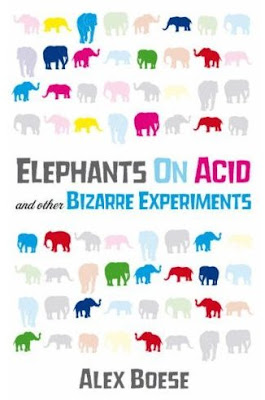 Meanwhile, it started me off on one of my rambles thinking about the weirder fringes of science in general.

I remember, some time ago, reading about the ethical quandary caused by human experimentation carried out by the Nazis and the Japanese during the 1940s. I won't go into all of the details as there are plenty of websites on the subject and the whole business is pretty gruesome and disturbing. However, I will mention low temperature research. The experiments, conducted at Dachau and Auschwitz were to discover human tolerance to freezing temperatures and involved, amongst other things, long periods of immersion in freezing and sub-zero temperature water. It was learned that most subjects lost consciousness and died when their body temperature dropped to 77 °F (25 °C). And herein lies the quandary ... almost everything we know today about treating victims of hypothermia is based upon these Nazi experiments. Consequently, in order to benefit from the knowledge, doctors have had to accept the findings and add them to the corpus of legitimate medical literature. This has proved to be controversial and presents an ethical dilemma for modern physicians who naturally do not agree with the methods used to obtain this data. It did inspire me to write a short story once based on the idea that a cure for a disease that will improve the lives of millions is only made possible by the torture of an alien species that secretes the chemical used in the cure during extreme pain and duress.

However, let's move on to a lighter subject. Firstly, if you like 'science on the edge of reason' type books, I urge you to read the excellently titled Great Mambo Chicken and the Transhuman Condition by Ed Regis. It's one of my all-time favourite books. Regis travelled around meeting scientists who (at the time - the book is now some 15 years old) had extraordinary visions of the future; nanomachines, bush robots, wetware, personal space travel, meat machines etc. Some of what they predicted has sort-of come to pass. A lot more is still in the realm of science fiction. But it is an excellent read. 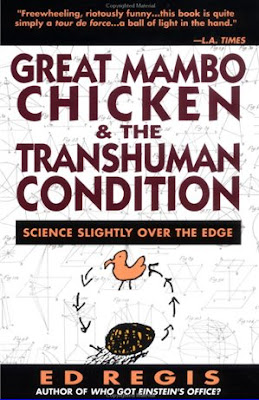 Secondly, I'd like to tell you about one of my favourite pieces of mad science in recent years: the Friendly Floatees experiment. This was when a veritable horde of rubber ducks, beavers, frogs and turtles - 29,000 of them in fact - were accidentally spilled into the open sea from a Chinese container ship in 1992. However, these littel rubber chums were later to provide valuable data about the effects of sea currents and wind direction. 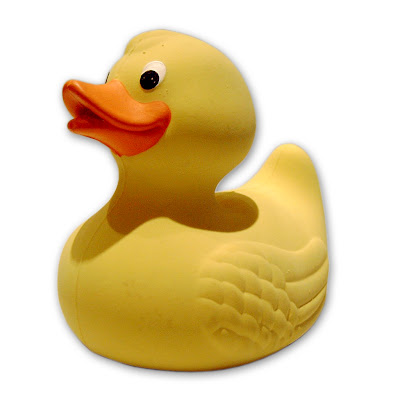 As well as assisting experts trying to conserve fish stocks and better understand the effects of global warming, the ducks and their little plastic friends have even helped investigate a suspected murder or two along the way.

"We know very little about how the winds and the current push drifting objects like derelict boats and human bodies around the seas," says Curtis Ebbesmeyer, an oceanographer in Seattle who has been leading efforts to track the ducks' progress. "It's an oceanographic blind spot - oceanographers aren't too good at measuring right at the sea surface."

And this is where the toys come in. Ebbesmeyer and his colleague, James Ingraham, a scientist at the National Marine Fisheries Service, have been carefully recording each reported sighting of the plastic toys.

The first find was in November 1992, when six were washed up in Alaska, some 3200 kilometres from where they were originally cast adrift. By alerting beachcombers and lighthouse keepers, and publicising their quest in local newspapers, the duo managed to track down hundreds more beached toys over an 850-kilometre stretch of shore during the next year or so. 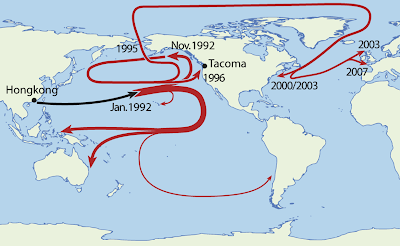 They then plugged the results into a computer model that Ingraham had devised to simulate the movement of the sea surface as it is buffeted by the winds. The model (called Ocean Surface Currents Simulation, or Oscur) uses measurements of air pressure going back to 1967 to calculate wind speed and direction, and the surface currents produced. "We model the changes in ocean circulation year by year and then apply that to fisheries problems," Ingraham says. The surface currents drive the top 50 metres or so of seawater around, and this is important for fisheries management as it contains the drifting eggs and larvae of spawning fish. "It's kind of a sideline for me to do the debris drift, but it's been more fun," he admits.

The ducks started to arrive on UK shores last year and are still turning up occasionally even now. Bleached by sun and seawater, the ducks and beavers have faded to white, but the turtles and frogs have kept their original colours. We should all be thankful that the ducks were only tiny. They could have been much larger. Remember Duckzilla from a previous post?

Two children's books have been written about the ducks, and the toys themselves have become collector's items, fetching prices as high as $1,000.

To read the whole Friendly Floatees story in more depth click here or read the Wikipedia entry here. I've shamelessly borrowed some text from both for this post.

My rubber duck is feeling a bit ordinary now. I have promised him we shall recreate the great toy spill next bathtime.

Here's a thing ... in some books of trivia it claims that a duck's quack doesn't echo. But it's an urban myth. And I know this to be true as I've heard it.

There's a fantastic bridge near here in Maidenhead, Berkshire that was built by Isambard Kingdom Brunel. It has the widest supporting arch of any bridge and, as the result, creates extraordinary echoes. They call it the 'sounding arch'. And ducks swim under it all the time. Quack-ack-ack-ack. See? Proved.