One of the great questions that has kept scientists and philosophers squirming for years is: How did a bunch of inorganic elements become organised into organic molecules and, ultimately, life? It seems as unlikely as the pieces of pasta floating around in alphabet soup forming themselves into legible quotes from Shakespeare. It's a difficult one to answer.

But as unlikely as it sounds, we know it happened because we're here. You, me, a trout, a pelican, salt, a cactus and a lump of granite are all, essentially, made of the same stuff. We're just put together in different ways. I always think of it as being a bit like Lego. If I had a big, big box of the stuff, I could build an almost infinite number of different objects of varying shapes, sizes and colour combinations. Substitute your Lego for the raw elements of creation and the number of possible combinations is so mind-bogglingly vast that it defies comprehension. Look at you, for example. You are completely unique; Nature has never, and will never again, cobble together an entity in quite the same way. Now think about how many human beings have ever existed. You are uniquely different to all of them. Then think about how many individual life forms have ever existed - every ant, every blade of grass, every toadstool. You are uniquely different from every single one of them ... and they're all different from each other too. Suddenly the odds of a bunch of molecules accidentally herding together to make the earliest precursors of DNA - a much simpler thing than even an ant - don't seem so long do they?

However, as it turns out, our gooey progenitors may have had some silty help.

In his 1985 book, Seven Clues to the Origins of Life, Dr Alexander Graham Cairns-Smith put forward the idea that the intermediate step between dormant matter and organic life might have been the self-replication of clay crystals. Let me explain ...

Clays are formed from silicate minerals dissolved in solution - usually water. The more silicates there are, the thicker and stickier the clay - like adding flour to water. Silicates are attracted to each other and 'grow' in flat sheets. These sheets then join together to make crystals. What Cairns-Smith noted was how similar this was to the way that living organisms grow. Both have organising principles driving their shape. For example, if an amoeba is mashed up, it reforms itself back into an amoeba. Clays do the same thing. And if some percentage of a mashed amoeba is introduced to a different mashed amoeba, they fuse to form a new and infinitesmally different amoeba. If a clay structure snaps, the exposed 'ends' will soon find other silicates to bond themselves to. If the types of clay they find are slightly different to the original, the clay 'evolves' into new types. 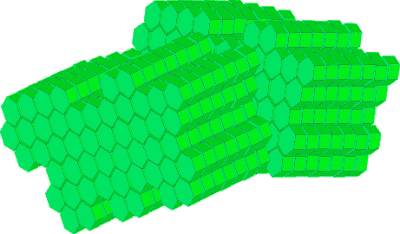 Clays have a curiously similar structure to the cells of living things.

Back in the ancient history of our planet, there were no organic cells and no molecules. The various chemicals and compounds that, one day, would form these things were all randomly floating around in the oft-mentioned primordial soup. They had no structure or form. But what if some of these compounds started to 'piggy-back' onto the crystalline structure of clays? They'd mirror the shape of the crystals and develop a kind of structure, like an organic glove fitting over a mineral hand. Then, if the clay was removed, there would sometimes be stable organic structures left behind. To give you another simple, and yummy, analogy ... if you coated a balloon in chocolate, let it set and then burst the balloon, you'd get a chocolate-shaped balloon. The chocolate no longer needs a 'vehicle' to retain that shape. Now substitute proto-organic molecule for 'chocolate' and clay for 'balloon'. Not nearly as tasty but the same principle applies.

As it happens, different clays do attract different molecules to their surfaces so, with each new type of clay produced, different mixes of proto-organic molecules would be plonked together. Every new mixing of clays would also see a mixing of stable organic molecules. And, suddenly, it's not quite so unlikely that one or more of those stable groups eventually performed a kind of genetic takeover from their clay vehicle. They became independent. They burst their own balloon. And that event could have led to the first glimmerings of life as we know it.

Cairns-Smith's theory is still not accepted by many scientists but it is intriguing nonetheless. Even if it turns out that it didn't happen that way here on Earth ... could it have happened elsewhere?

For a fuller explanation of the theory, check out this site or read Seven Clues to the Origin of Life by A G Cairns-Smith (ISBN 0-521-27522-9) or check out Graham Carirns-Smith's Wikipedia entry.

(Note: This article first appeared on my now defunct Worlds of Possibility blog in 2006 and was my attempt to explain a complex theory in simple, plain English terms. Did I succeed?)

Posted by Stevyn Colgan at 3:24 pm

Actually, I think you'll find that if you cover a balloon in chocolate, let it set and then burst the balloon you would in fact have a balloon-shaped chocolate not as you put it a chocolate-shaped balloon. I think you should go and staple your knees to a pederast as a punishment....

I may just have to do that. You are completely correct in your deep analysis of the whole chocolate/ balloon debacle. Your knees were obviously stapled to a pedant instead.

Ah to have quick wit.....anyhow Becky said the green thing looks like her model of the Giants Causeway!