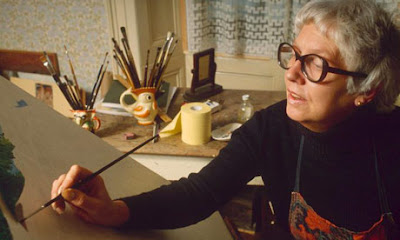 I've just heard the news that artist Beryl Cook died earlier today peacefully at her home in Plymouth with her family. She was 81.

I first became aware of her work in the mid-1980s when I was a police officer in London's West End. In the quieter moments, I used to enjoy wandering around the art galleries in St James's and Bond Street, occasionally chatting to the gallery owners and some of the artists. Favourites included Chris Beetles' gallery of cartoon art and illustration (still a favourite haunt to this day) and the Portal Gallery in Dover Street. The latter was a quite a small place tucked around the corner and just a diamond's throw from the garish delights of Asprey's the jewellers. It always featured some wonderful contemporary art. But Beryl Cook's work caught my eye immediately.
Her work was naive, it was natural, it looked like I could do it (although appearances can be very deceptive - you try to replicate her style and technique) and it was dripping with humour; larger ladies enjoying a night out on the town, chubby nudists, cheating Crown Green bowlers ... Beryl had captured it all. It was as if she had taken the traditional British saucy seaside postcard, mixed it with a dash of Benny Hill and the Carry On films, thrown in some Ealing comedy and then whipped it all up with a topping of Victoria Wood wit. It was just stunning. I wandered into the gallery for a closer look and I decided there and then that, one day, I'd own one - not an original of course; even back then her pictures were commanding thousands (a current Beryl Cook original will set you back anything up to £50,000 - a price that, sadly, will now increase due to rarity). A few years later, I bought the hardback book of her work - The Bumper Edition - and it's been a source of entertainment ever since. Here's the cover of the paperback edition. Click on it for a link to Amazon. 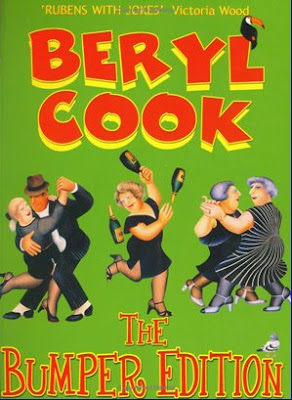 It took me a few years but eventually I got my Beryl Cook. It's a quality giclee print, signed and numbered and called Elvira's Cafe. Dawn bought it for my 40th birthday and I just love it. 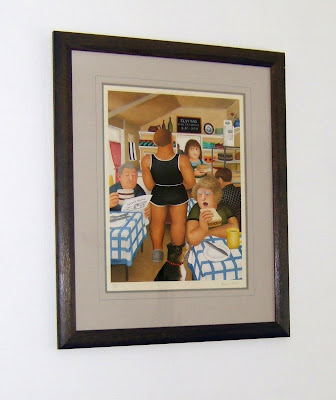 It's the little touches that make it special: the saucy look in the server's eye; the look of the sausage sandwich eater that says to the begging dog 'Fat chance, Mutt'; the contented newspaper reader enjoying a tea before work. Beryl was a painter of the ordinary and the mundane. She was fascinated by real people and real places and more of a social commentator than a fine artist, which is maybe why the fine art world never really took her seriously. However, her work was loved by us common folk. The Queen reportedly liked it too (Beryl painted several portraits of the Queen and family) and awarded her an OBE.

I shan't spend any more time retelling her life story (which is as brash and hilarious as her pictures) as plenty of other websites and newspaper obituaries will be doing that over the next few days. I will just say ... thanks, Beryl. You made me laugh. A lot.

My condolencies to her family.

On behalf of all chubby nudists everywhere this is very sad news.
x

Beryl Cook is new to me. Her work reminds me alot of Fernando Botero's. Always sad to lose such a creative talent.

Reminds me of Martin Leman too... he paints lovely round ladies AND cats. I think the cats are the more prominent in his art.